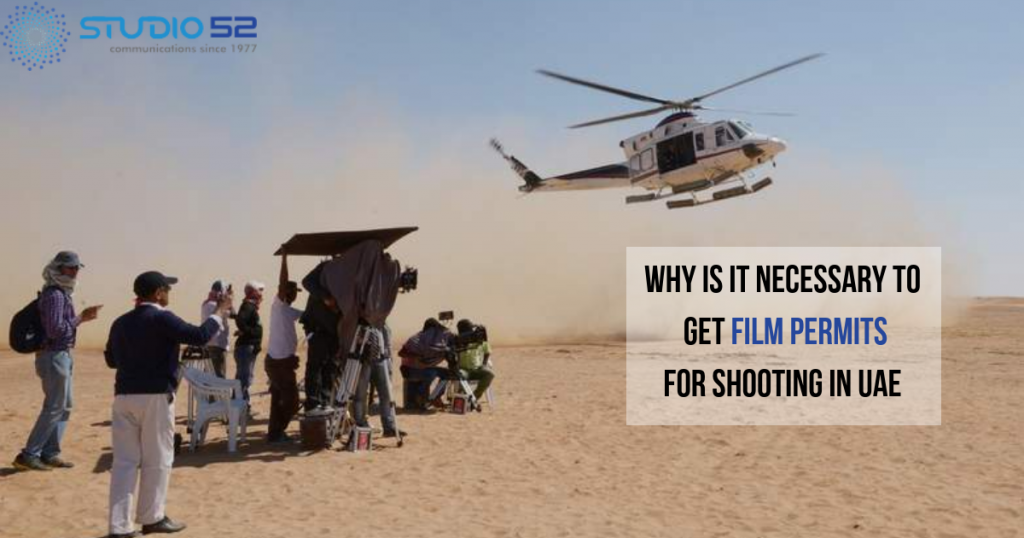 An Insight of film shooting permission in UAE

UAE is the latest attraction for filmmakers. Be it top Hollywood or Bollywood movies, are filmed at different locations in Dubai, Abu Dhabi or in the UAE region.
In filmmaking, outdoor shoots are very crucial aspects which require high-level perfection.
On the off chance that you are planning to shoot a film in the UAE and the Gulf, it is essential for you to understand that the administration there have stringent rules concerning film shooting Regardless of whether you have to shoot a motion picture, narrative, corporate video or TV show or commercial movie its mandatory to get Film permission in Dubai, UAE.

Filming Permit is in the form of document (issued by the city or federal governments) that certify your shooting permission.
The Film Commission deals with the grant of Film Permission in UAE, Dubai and the Gulf. It additionally screens each & every activity concerning shooting in this locale.
So you need to get film Shooting Permission Letter UAE, or you will have to pay a huge sum as fine.

One of the most overlooked parts of making your film shoot “legit” is to obtain Shooting Permission. The procedure seems to be a bit tedious & time-consuming on the off chance that you have never applied for a filming permit before, however, once you get acquainted the process is rather easy and is quite similar from agency to agency, location to location.

When filmmaker came across the process of film permission in UAE, often thought where they would need the filming permit?
Well, will provide you a brief on where the shooting permission is necessary for your film shooting.

On the off chance that you are merely strolling around with your camera and shooting calmly, you needn’t bother about permits. But in case of commercial & entertainment purpose, you will need proper film permission in Dubai, UAE and other Gulf countries. If you have a producer or area scout, they can take over and get the filming permit. Alternatively, if you’re without one of those specialists–like most small productions–you’ll need to coordinate the film permission service provider in UAE. To avail, the shooting permission & film permit in UAE & Gulf get in touch with Studio 52 the leading company in providing film permission & production-planning services.

So if you have questions about filming Permits? You know who to call!

For more updates on film permit in UAE stay connected with us at: Studio52